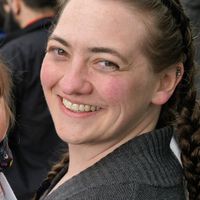 Erin Porter
Erin Porter is a freelance writer who has been covering Germany since she moved to Berlin in 2007.
our editorial process
Erin Porter

If you weren’t raised in Europe, you have probably never heard of the Eurovision Song Contest. I certainly had no idea what I was getting into when I sat down to watch my first show. And oh my, what a show.

If you like American singing shows, you should love Eurovision. Eurovision can be described as a singing competition on steroids where competitors represent their nation in an Olympic throw-down of talent. Nothing is too over-the-top for these titans. Monocles! Unicycles! A princess! I saw all of these in just one act with Moldova’s 2011 submission from Zdob și Zdub, “So Lucky”.

For lovers of the absurd, this international competition of glitz and glamor is highly addictive TV. I often have trouble telling the best from the worst and eagerly look forward to the finals each year. Here is your guide to Europe's Largest Song Competition and Germany's candidate this year.

History of the Eurovision Competition

The Eurovision Song Contest started in the 1950s by the European Broadcasting Union (EBU)  in an attempt to return to normalcy after the destruction of WWII. The hope was that this would be a positive way to foster national pride and friendly competition.

The first competition in the spring of 1956 in Lugano, Switzerland. Although just seven countries participated, this has led to one of the longest-running television programs in the world. It is the most watched (non-sporting event) with about 125 million tuning in each year.

How does Eurovision work?

After a series of semi-finals, each country performs a song on live television followed by voting. As far as restrictions, all vocals must be sung live, songs cannot be longer than three minutes, only six people are allowed on stage and live animals are banned. While many acts are defined by their quirkiness, the competition has also been a platform for such famous performers as ABBA, Céline Dion and Julio Iglesias.

How to watch Eurovision in Germany: The show airs in all participating countries. In Germany, the show will air on NDR and ARD. It is also possible to watch the show online with a handy Youtube channel available for screening.

How to vote: After all the performances, viewers in the participating countries can vote for their favorite song(s) by telephone text and official Eurovision app. Up to 20 votes can be placed by each person, but you cannot vote for your own country. Each country's scores are tallied up to give 12 points to the most popular entry, 10 points to the second most popular, then 8, 7, 6, 5, 4, 3, 2 and 1 point respectively. Numbers to call will be announced during the show.

These results are merged and the country with the highest number of combined points, wins. A countdown of points from each country at the end of the show tallies up points in a breathless finale.

41 countreis will compete in 2019. For the first time the contest is being held in Israel, the country of last year's winner. Expect to hear last year's winning song,  "Toy" performed by Netta, many times in the lead up to event. And if you can't get enough of this year's music purchase the official compilation album of the contest, Eurovision Song Contest: Tel Aviv 2019.

Who is representing Germany in the 2019 Eurovision Competition?

Germany is one of the "big 5" of Eurovision (along with the United Kingdom, Italy, France and Spain) as it has competed almost every year since inception - in fact, no country has been represented as often. They are also one of the biggest financial contributors. These countries are automatically qualified for the Eurovision final.

S!sters won the national final with the song "Sister". Press your thumbs for a German win!