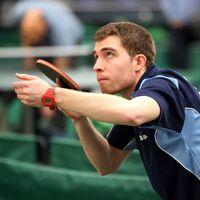 Table tennis balls are changing! Starting on July 1st the old celluloid balls will be replaced by new plastic or poly balls. There seems to be quite a lot of confusion surrounding this change so here is what you need to know.

Why Are the Balls Changing?

The change is being introduced by the ITTF, the International Table Tennis Federation. Initially, the change from celluloid to plastic/poly balls was said to be important due to the "celluloid crisis" and the potential dangers of celluloid, however, ITTF President Adam Sharara has since admitted that the real reason for the change is to reduce the speed of the game in an attempt to make the sport more viewer-friendly. The following is a quote from Sharara...

From the technology point of view, we're going to reduce speed. In fact, we're developing a technology test, which'll have a bounce limit. If you see Chinese players performing the stroke, it's difficult to see the ball. This has to slow down. We're also changing balls. FIFA made the balls lighter and faster, but we're changing balls from celluloid to plastic for less spin and bounce. We want to slow down the game a little bit. It'll come into effect from July 1, which, I think, is going to be a very big change in the sport.

How Will They Affect Table Tennis?

The ITTF has conducted a study, with the help of ESN, to try to answer that very question. It is a comparison of the plastic (poly) balls and celluloid balls, using an evaluation of the difference for rebound on a racket and also player perceptions.

In summary, here is what they found...

It seems that the changes are relatively small. However, in a sport like table tennis, where players are so close to each other and millimeters can be the difference between a shot going on or missing, these small differences can be quite important. We suppose that players will get used to these changes and adapt but that will surely take time.

The biggest conclusion we took from the study was that they weren't really sure why the ball was reacting differently. It seems like they aren't even sure if the change will have the desired effect of slowing down the game and making it more viewer friendly. They certainly need to spend a little more time investigating this in our mind. It would be a huge waste of time and money if the new ball made the game "different" but didn't actually make it any slower or easier to watch/understand.