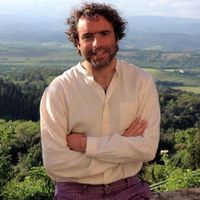 Philosophy of food is an emerging branch in philosophy. Here is a list of quotes that are pertinent to it; if you happen to have additional suggestions, please do send them along!