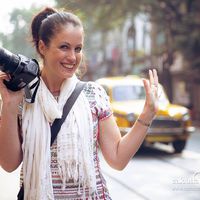 Sharell Cook
Sharell Cook lives in Mumbai full-time and has been writing about India travel for TripSavvy since 2008.
our editorial process
Sharell Cook

Nadi astrology is based on predictions that an ancient Tamil sage called Agathiyar is said to have written on palm leaves. The leaves were initially stored in the Saraswati Mahal Library in Tanjore, Tamil Nadu. However, most of them were auctioned during British rule. Families of astrologers from Vaitheeswaran Koil, a Shiva temple about 250 kilometers (155 miles) south of Chennai near Chidambaram, obtained the leaves and passed them down from generation to generation. Hence, Vaitheeswaran Koil is considered to be the birthplace of Nadi astrology.

Apparently, there's a palm leaf that corresponds to everyone. If you find your leaf, you'll get to know your future!

While Vaitheeswaran Koil in Tamil Nadu is regarded as the best place to consult a Nadi astrologer, the challenge is identifying the real ones from the fakes. Numerous people have reported not finding any legitimate astrologers there. They've either been told that Nadi astrology is a scam, or they've encountered scams from Nadi astrologers around the temple (such as this alarming must-read example).

Yet, the fact that many people can be seen getting rituals performed indicates some belief in it.

Want to try your luck? The two most renowned, and seemingly genuine, Nadi astrology centers near Vaitheeswaran Koil are those of C Poosamuthu (67 West Car Street, Phone: 04364-279455) and A Sivasamy (Sri Siva Nadi, 18 Milladi Street, opposite Indian Overseas Bank, Phone: 04364-279463). These are the only two families of astrologers who have been practicing for many generations and are believed to possess most of the original Nadi scriptures.

Will you have a positive experience there? It's impossible to say. It all hinges on locating the correct leaf, which is easier said than done! Your leaf may be with a Nadi astrologer at Vaitheeswaran Koil, or it may be at a Nadi astrology center somewhere else in India. Or, it may no longer exist (many leaves have been destroyed over the years). Not everyone will get their leaf. Whether you do, or not, is supposedly up to destiny.

Is Nadi Astrology Really a Scam? What to Expect

There are tales of accurate predictions, so it's not possible to say that Nadi astrology doesn't have merit. However, the problem lies in being able to find an astrologer that's authentic and has the right leaf. The vast majority of them don't.

The tedious process of finding the right leaf is carried out, firstly, by taking a thumb print. The lines on the thumb are classified into various types and the palm leaves are arranged according to these types. There are 108 categories of thumb prints, and for each type there are four to five bundles of leaves. Each bundle of leaves has 12 chapters containing names, life details, and past life details. (If you want all 12 chapters read, you'll have to pay accordingly). The appropriate leaf is identified through a process of elimination. The astrologer asks a series of questions and answers related to the information on the leaves selected. In order for your exact leaf to be found, you need to respond "yes" to all the questions for a leaf.

The astrologers will frame their questions in a way that enables them to obtain personal information, and then reconstruct it to give a prediction. They also play on people's fears, and will always suggest expensive remedies to correct "problems" (such as sins from past births) that they identify.

I visited a Nadi astrologer in Mumbai because I was curious about the practice. He predicted that I would be in a vehicle accident, and that certainly didn't come true. As I didn't answer yes to all the questions, I wasn't convinced that he even had my leaf. Hence, I didn't expect too much from the reading.

Despite uncertainty over the leaf, the astrologer still read out my future. Then, at the end, he suggested I pay 13,000 rupees for priests in Tamil Nadu to chant special mantras. This would ensure that my future would be rosy. (No, I didn't pay).

I certainly didn't go away feeling like I had a meaningful experience.