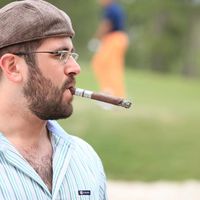 Whether you’re a new smoker or a non-smoker shopping for cigars to give as gifts, visiting a cigar shop can be intimidating. There’s often lots to choose from and very little way to narrow your choices based on price and packaging alone. Once you’ve picked a cigar out, if you stick around to smoke one on the spot, it’s easy to feel lost in some of the rules and rituals. Here are just a few tips to keep in mind.

Do Ask the Store’s Staff for Help

There are exceptions, but most tobacconists (that’s what you call someone who sells tobacco products) are very knowledgeable about their products. Think of them like well-trained bartenders. A bartender wants you to trust him or her when you’re ordering your second beer, so he’s got all the incentive in the world to make sure you enjoy your first. What’s more, cigar stores don’t tend to generate mobs of people at the cash register, so staff usually have plenty of time to help you find a cigar that’s right for you.

"People can feel intimidated when they walk into a store because they think that if they don't know something they're going to feel inferior or something," said Nicholas Melillo, founder, and blender at Foundation Cigar Company. "Everybody should feel free to ask questions. If it's a good shop, you'll have someone who is educated and can steer in the right direction."

It’s also worth noting that if the store has a smoking area in it, these people are as much in the hospitality business as they are the retail business. They should make you feel welcome and help you get acclimated so you feel more at home next time around. If you don’t feel that way, it’s on them, not you.

Don’t Manhandle the Cigars Before You’ve Bought Them

If you’re new to cigar smoking, it can be very tempting to walk up to a shelf and give a cigar a good squeeze, as if to let everyone know you’re inspecting them for quality. You’re not fooling anyone, and you might just damage the cigars.

It should go without saying, but you should never put a cigar in your mouth unless you’ve paid for it (or put it on your running tab, if the store in question does that kind of thing) and are ready to smoke it.

Do Feel Free to Smell a Cigar Before You Buy It

It’s perfectly acceptable to smell a cigar. This can give you valuable information (which you’ll learn to discern with experience).

Lots of people will pick up a cigar and run their noses along the sides of it, maybe even closing their eyes and breathing in deeply as if they were taking in a wine’s bouquet.

"That's like trying to smell a bourbon through the bottle," said Nicholas.

If you want to get a sense of what a cigar’s pre-light aroma, you want to smell it at the foot. That open end of the cigar exposes the filler and binder in the blend, which you will also be smoking. Smelling a cigar along the sides is kind of like tearing off a piece of a bun to see what a burger tastes like. There’s other stuff in there!

That said, you don’t need to put the thing right up against your nose to smell it — especially if you don’t end up buying it. Nobody wants to buy your snot stogie.

Do Strike Up Conversation With the Cigar Lounge Regulars

Talk to just about anyone in the cigar business, and you’ll hear plenty of times about how and why cigars are “the great equalizer.” What people in the know mean by this is that cigars often serve as a point of connection for people who otherwise might not assume they have much in common. Walk into any bustling cigar lounge and you’ll find people of all different income levels, races, religions, and political leanings. Think of the cigar lounge as being a friendly bar, except most people are sober enough to stay engaged in conversation.

Lots of people will preach loudly about the right and wrong ways to light and enjoy your cigar. In the end, what you do with your cigars is your business, and you should fall into whatever routine you enjoy most. That said, there are other rules that relate to consideration for your fellow smokers. Those rules should be followed.

Among the most important: do not put your cigar out by shoving the foot of the cigar into an ashtray. You’ll find that all that does is produce more smoke and — if you’re smoking outdoors — leave behind a mess of ash and tobacco that can easily get blown around by a light breeze.

Instead, just set your cigar down and let it go out on its own.

It's always great to find a cigar bar that still allows patrons to smoke their cigars and order drinks. Most stores don’t sell beer, wine or spirits, but many of them do allow customers to bring their own drinks in to enjoy with their cigars. This makes cigar lounges great (and affordable) places to watch a game, catch up on some news, or even just get together with friends. Just remember that tobacconists are in the business of selling cigars, so you should make sure you’ve always got one lit so long as you’re using their space to hang out.